Whew – the election is over.  A very important time for the country and the decision has been made.  I stayed up all night because I love election night.

Whatever your political convictions I am sure you will agree with me that we were proud to supply a political party with “Made in Britain T-Shirts”.    T-shirts are one of the most popular garments world wide and usually manufactured overseas.

The Labour party approached us to supply a t-shirt, pantone matched to the C199, printed with an election message – all within two weeks!  They wanted them to be made in Britain.

It was exciting to be manufacturing something so topical and we realised that it would take a super human effort on our part to make sure all went to plan. 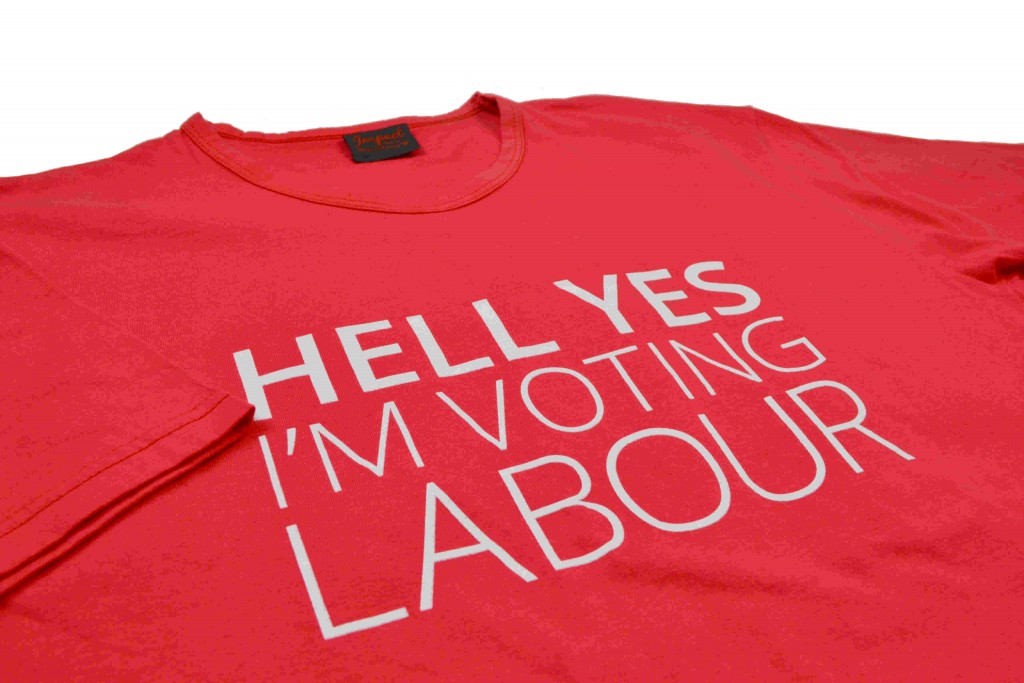 The fabric which was also manufactured in the UK was dyed to match C199, the fabric cut to a lovely modern style t shirt,  manufactured, then printed with their design.  All in the UK, within two weeks.

That’s some achievement to be proud of, and good on The labour Party for supporting British manufacturing!

The words ‘Made in China’ are three words which are engraved into an enormous amount of products in the UK. For decades, companies have shifted manufacturing overseas, to places like China and India, tempted away by cheap labour costs. This had a devastating impact on domestic manufacturing in the UK, which declined from about 30% of national GDP in the late 1970’s to 14% before the recession to little more than 11% after that. But as wages and costs are escalating overseas, will more people  begin to invest in British manufacturing again? Is “Made in Britain” really making a comeback?

There is no denying that British manufacturers were hit hard by the recession, struggling to keep up with falling orders and cheaper competition from abroad. However the “Made in Britain” brand may be heading for a genuine revival as more UK companies choose to swap their international suppliers for UK based ones. In fact our output is actually 25% up on the production levels of the early eighties and it’s continuing to rise. So if you thought British manufacturing was dead, it may be time to think again.

The demand for British-made goods is particularly high from overseas, where the perceived quality and craftsmanship is well respected. In fact, new research independently commissioned by Barclays Corporate Banking has shown that products labelled “Made in Britain” are gaining a considerably higher premium when sold abroad than those with no declared country of origin. When consumers in eight export markets see the the Union Flag on a product, their desire to buy increases.

But what about the rest of us? Does a “Made in Britain” label matter to us too?

So what are British manufacturers doing to support “Made in Britain”?

There are welcoming signs of life for Britain’s textile industry. In fact, employment in UK manufacturing has risen and continues to rise as companies invest in machinery and skills. The UK fashion industry and the government are beginning to sit up and think of new ways to sustain the “Made in Britain” brand, from its craftsmanship to it’s manufacturing, with now lots of investment in apprenticeships to train the next generation of skilled workers.  Luxury UK labels like Mulberry and Burberry are bringing production back home and high street stores like John Lewis are looking to bring textile manufacturing back to the UK from foreign factories as part of its big campaign to sell more “British made” goods. Not only that, according to the Manufacturing Advisory Service, one in nine SMEs reshored their production from overseas last year, with top reasons for doing so being to reduce costs, improve quality and shorten lead times.

So why should we buy British?

“Made in Britain” labelling is actively supporting communities, offering opportunities for employment and skills development in a sector of the UK economy, which has declined rapidly in recent years. The creation of jobs should be a good enough reason alone for Buying British made goods,

So we now have a real window of opportunity to build manufacturing back up in the UK and it seems we are taking the opportunity by both hands. A recent report suggested that there will be 50,000 manufacturing jobs in the UK manufacturing sector over the next two years as a consequence of manufacturing being moved back to this country. This estimate is echoed by the accountants, PWC, that suggest that 100,000 to 200,000 additional jobs will be created over the next decade and that annual national output will be enhanced by £6-12 billion at today’s prices by the mid-2020’s.

So what can we do?

As consumers, we need to actively seek out products that are made in Britain and retailers need to continue to make these products easier to come across. Places like China and India aren’t the cheapest places in the world to manufacturer anymore and therefore there’s no need for them to be dominating the world’s manufacturing. Once upon a time, Britain was famous for it’s manufacturing and it’s about time it happened again. The “Made in Britain” label has always been held in high esteem, but the industry began prioritising profit over quality and now out of the recession, we are looking at things differently. I guess only time will tell if the “Made in Britain” brand recovers fully.